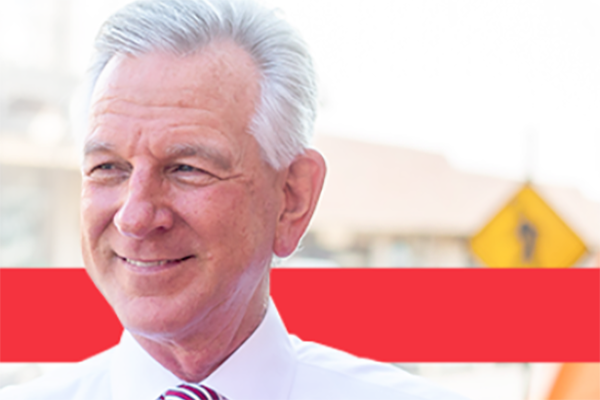 When Jeff Sessions announced he would once again run to represent Alabama in the U.S. Senate, it was widely assumed he would cruise to victory. After all, Sessions was running for the very Senate seat he had occupied for two decades. With recognition in Alabama, and a well-established political machine to back him up.

However, as the race drew closer and closer to the March 3rd Republican Primary, one political newcomer proved to be a growing thorn in the side of Jeff Sessions…

Tuberville is the former head football coach from Auburn University, and not a career politician, yet leading up to the primary election, Tuberville was only trailing Sessions by a few points.

And when the smoke cleared following the March primary, Tuberville had actually polled ahead, beating Sessions 33% to 31%.

Tuberville’s margin of victory in March was narrow enough to trigger a runoff that would inevitably be delayed due to the COVID-19 pandemic.

When the July 14th runoff finally arrived, Tuberville’s 2 point lead in the primary had grown to a blowout victory of 62% to 38%

What went wrong for Sessions?

While it’s easy to chalk Tuberville’s win up to Alabama’s love of football, the more than 20% margin of victory is far too great for that theory to hold water, especially in a state whose football loyalties are deeply divided between two college football powerhouses.

The fact of the matter is, Alabama voters were sick and tired of establishment politicians turning their back on the principles that the people of Alabama hold sacred.

Just one of the many skeletons in Jeff Sessions’ closet was his lengthy track record of supporting an anti-gun agenda.

Despite “earning” an endorsement and an “A+” rating from the National Rifle Association Political Victory Fund, Jeff Sessions has a lengthy record of anti-gun actions both as a U.S. Senator, and as Attorney General of the United States.

Most notably, then-Attorney General Jeff Sessions was the driving force behind the so-called “bump stock” ban.1

More dangerous than the ban itself was the precedent Jeff Sessions set by going around Congress and implementing his ban without a single vote, and over the vocal objections of gun owners nationwide.

In doing so, Sessions opened a Pandora’s Box for future presidents to ban virtually any firearm or firearm accessory.

In fact, rumors are already circulating that the ATF is looking to use the same tactic to unilaterally ban pistol braces, a common firearm accessory owned by hundreds of thousands of law-abiding gun owners.  The ATF would presumably use Jeff Sessions’ precedent on bump stocks as a road map.

Sessions also used his power as Attorney General to round up law-abiding citizens and push them into the NICS gun registration system, starting with military veterans. 2

As a result, nearly 60,000 Airmen were added to the list of 250,000 veterans who were placed on the federal “no guns” list without due process.

Both of these Sessions-spearheaded gun control efforts came in the wake of deadly shootings, all to placate the mainstream media.

However, this wasn’t the first time Sessions surrendered to the pressure.

In fact, going back to 1999 as the U.S. Senator from Alabama, Jeff Sessions was one of the first lawmakers in Washington to try to broker a “deal” when President Clinton pushed for gun control. 3

Finally, Jeff Sessions voted to confirm Hillary Clinton as Secretary of State, setting in motion the chain of events that led to the UN “Small Arms” Treaty. 7

The pro-gun alternative to the establishment

With the Alabama U.S. Senate race presenting a clear target of opportunity for the pro-gun grassroots, all that was missing was a conservative alternative to Sessions and Jones.

This is where Tommy Tuberville enters the plot.

At the start of the 2020 election season, Tuberville was a political unknown, but he quickly made a bold move that many ambitious politicians don’t have the backbone to do; he filled out his National Association for Gun Rights Candidate Survey 100% pro-gun.

In doing so, Tuberville signed his name in ink pledging to oppose all gun controls,  including “Red Flag” Gun Confiscation and bans on so-called “Assault Weapons.

He also pledged to oppose the United Nations’ “Small Arms Treaty” and to champion pro-gun legislation such as the SHUSH Act, which fully removes firearms suppressors from regulation under the National Firearms Act of 1934 and Gun Control Act of 1968.

Sadly, Tuberville’s pledge is not the norm in America, even for supposedly pro-gun politicians.

All too often, politicians are unwilling to pledge their opposition to gun control in writing.

In the event they are forced by party leadership to compromise on their values, such a pledge could be weaponized against them come election season.

Unfortunately, most ambitious politicians refuse to go on the record against the specific gun control measures they are likely to face once in office.

Fortunately for Alabama gun owners, Tommy Tuberville is not like “most politicians.”

As soon as Tuberville emerged as the pro-gun candidate who could defeat Sessions and Doug Jones, the National Association for Gun Rights PAC sprang into action.

Delivering letters, postcards, emails, Facebook ads, and even text messages to as many pro-gun Alabama voters as possible, NAGR-PAC worked round the clock to expose Jeff Sessions for the gun grabber that he is, and to help push Coach Tuberville across the finish line.

Now, with a dominating victory in the runoff under his belt, Tommy Tuberville is in prime position to unseat gun-grabbing Senator Doug Jones in the November 3rd General Election.

We won’t get fooled again.

The downfall of Jeff Sessions should send a message to politicians from coast to coast.

Gun owners are paying attention to your anti-gun votes, and will hold you accountable come election season.

“Touting pro-Second Amendment rhetoric on your campaign website and bragging about you’re A+ ratings from the establishment gun lobby does not nullify actual anti-gun actions,” said Dudley Brown.

It is not enough for Republicans to be simply less anti-gun than the Democrats.

For any politician to earn the vote of pro-gun Americans, they must to be a 100% no-compromise supporter of the Second Amendment. The first step is to sign on the dotted line your absolute guarantee that you will never vote for gun control. The next step is to keep that promise.

Now more than ever, the establishment gun lobby needs to lead, follow, or get out of the way.

Continuing to endorse candidates who routinely vote anti-gun simply because they are in good with your “Gucci-loafered lobbyists” only hurts our fight to restore the Second Amendment.