Is There Anything Better Than a Recreational Tank? 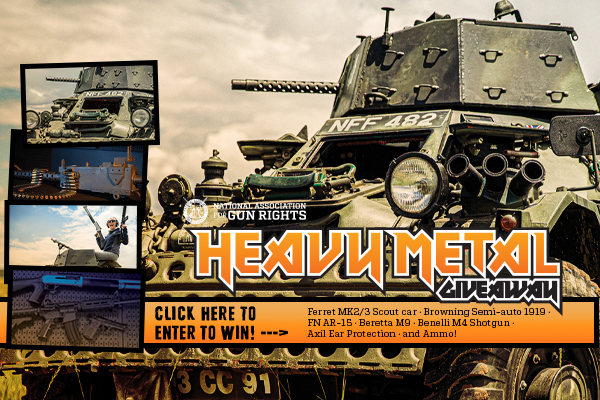 Do you know what you need?

Some HEAVY METAL — specifically THIS TANK — your National Association for Gun Rights is giving away right now!

Ok, it’s not “technically” a tank.

It has a turret with a WORKING belt-fed Browning M1919 (we replaced the fully-auto one with a semi-auto to make it legal).
And believe me, your neighbors are going to think it’s a tank when they see you driving down the street!

So let’s just call it a tank.

All you have to do is confirm your pledged support by September 15th, and you’ll be entered to WIN the National Association for Gun Rights’ HEAVY METAL GIVEAWAY, which includes:

You’ll also be entered to win our Grand Prize — the 1959 Ferret I told you about.

I’m conducting this special offer because Second Amendment supporters are facing some CRITICAL battles right now, and I need to make sure our priorities line up with yours.

In offering this giveaway, I’m hoping to hear back from 100% of our supporters.

I’m also hopeful patriots like you will consider a generous contribution as well to help the National Association for Gun Rights continue our important work.

But do you know what I think is outrageous?

Everything President Joe Biden — the most anti-gun President in U.S. history — is trying to do to our country.

With House Speaker Nancy Pelosi (D-CA) and Chuck Schumer (D-NY) calling the shots in BOTH houses of Congress, the gun grabbers are doing everything they can to RAM through their entire radical agenda, including:

*** The Feinstein Gun Ban. Far worse than the expired ban, which was in effect from 1994-2004, this California-style ban would outlaw 200+ specifically named firearms for cosmetic features gun grabbers think look “scary.” As Congressman Eric Swalwell (D-CA) wrote in a USA Today op-ed, “Ban assault weapons, buy them back, go after resisters;”

*** Banning magazines that hold more than just a handful of rounds — along with the firearms that use them. Imagine going to jail or facing exorbitant fines because someone found an old $10 magazine you forgot about in a closet;

*** NATIONAL GUN REGISTRATION (under the guise of so-called “expanded background checks”). The gun grabbers’ dirty secret is that the ONLY way such a scheme could be enforced is for our federal government to maintain 4473 forms to keep track of every gun and gun owner in America. And as you and I know, registration is just the first step toward CONFISCATION!

*** SHUTTING DOWN American gun manufacturing overnight. Under President Biden’s scheme, firearms manufacturers could face expensive lawsuits if one of their firearms is used in a crime. Just imagine Ford being liable if an F-150 driver ran a red-light and caused a crash! You might as well kiss your favorite American firearm brand goodbye if this becomes law. To help grease the skids for all of this madness, the Gun Control Lobby is turning the screws on U.S. Senators Joe Manchin (D-WV) and Kyrsten Sinema (D-AZ) to GUT the filibuster.

That’s right. Just TWO Democrat U.S. Senate votes — and grassroots patriots like you — could be all that’s stopping ALL of our Second Amendment freedoms from going up in smoke.

That’s why I’m counting on you to pledge your support for all of the National Association for Gun Rights’ top priorities as they stand today.

If you respond by September 15th, you’ll be entered to win our HEAVY METAL GIVEAWAY, including the Ferret tank I told you about.

These relatively light armored vehicles were so respected by national defense forces, 20 countries’ national armies were still using them as recently as 1996! Since then, they’ve become a huge hit with car collectors and collectors of military vehicles.

In fact, well-known gearhead Jay Leno has one.

You see, unlike tanks, the Ferret rides on run-flat tires instead of tracks and has a top speed of 45 miles per hour.

So you can drive it on the road while enjoying all the dirty looks you get from the preening pansies in the gun control crowd!

I’m conducting this HEAVY METAL GIVEAWAY because your ongoing support is so important to the National Association for Gun Rights — especially with everything that’s at stake throughout the rest of 2021 and all of the battles we still have on our plates.

I don’t have our anti-gun national media’s megaphone.

I don’t have Michael Bloomberg’s BILLIONS.

But my hope is that I have YOU.

The National Association for Gun Rights’ power comes from good folks like YOU — hunters, collectors, hobbyists, target shooters, constitutionalists, and those who carry firearms for self-defense.

But standing up to the gun grabbers and their schemes depends on good folks like you who will take on the fight — and who will commit in both words and actions to ensure the flame of liberty is never snuffed out.

So please pledge your support for the National Association for Gun Rights’ efforts right away.

If you do so, you’ll be entered to win any of the three 4 firearms listed previously — including the Ferret tank — as part of our HEAVY METAL GIVEAWAY.

But you must pledge your support by September 15th to be entered to win.

With everything on the line in 2021, we must continue to keep up a pro-gun presence everywhere.

So if you could possibly consider making a generous contribution, I’d really appreciate it.

Perhaps in addition to pledging your support and entering to win the HEAVY METAL GIVEAWAY, you could agree to a contribution of $100?

I know that’s a lot to ask for.

But I know you understand the stakes.

With gun grabbers in TOTAL control of Washington, D.C., if we let up the pressure — even for an instant — our Second Amendment freedoms could be toast.

Whatever you decide, please pledge your support by September 15th to have your name entered to win our HEAVY METAL GIVEAWAY!

P.S. With everything that’s at stake in 2021, my hope is you’ll pledge your continued support — letting me know you support our efforts.

If you do so by September 15th, I’ll automatically enter your name to win ALL the items in our HEAVY METAL GIVEAWAY — including the Ferret tank you see.