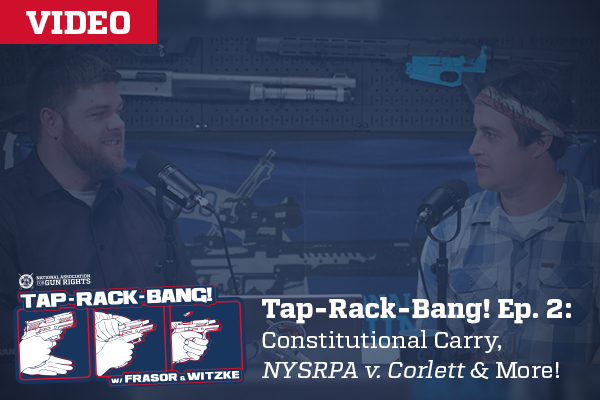 In the latest episode of Tap-Rack-Bang! Ryan and Tyler cover everything from Constitutional Carry to ATF Director nominee David Chipman’s career as an enemy to the Second Amendment.

Here are just a few highlights from the episode.

Last week, the Texas Senate voted to pass Constitutional Carry — but we’re not out of the woods yet. The bill’s amendments still need to be voted on and approved by the House before it can be sent to Governor Abbott’s desk to be signed.

On a lighter note, Utah’s Constitutional Carry law took effect on May 5th, which we celebrated with a parody of Bill Pullman’s iconic speech from the movie Independence Day.

Our legal foundation, the National Foundation for Gun Rights is getting ready to file an amicus brief in this landmark Supreme Court case.

Check out GunRightsFoundation.org for more information!

Mike Bloomberg’s outfit Everytown for Gun Safety has been on a gun control spending spree during the last few months.

In just quarter one of this year, the group has spent over $1 million trying to get their agenda rammed through Congress.

They really haven’t gotten anywhere though as NAGR members continue to hold the line and fight gun control. Join or donate today to help us keep up the fight!

New episodes of Tap-Rack-Bang! drop every Friday! Subscribe to our YouTube channel to catch the latest episode.