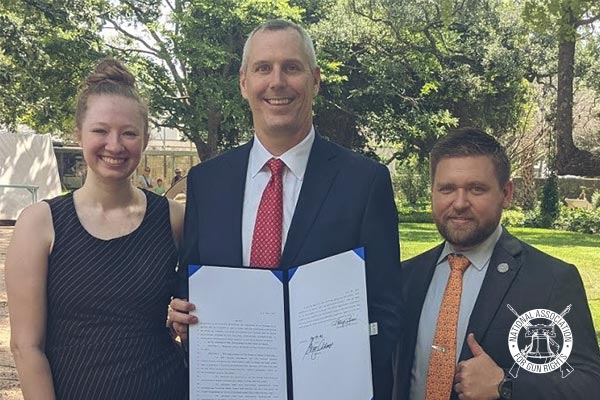 After nearly a decade-long fight, the members and supporters of the National Association for Gun Rights and its state-affiliate, Texas Gun Rights, succeeded in pressuring lawmakers to make Texas the 21st Constitutional Carry state!

In spite of its “pro-gun” bravado, gun rights in the Lone Star State lagged behind much of the country with not even legalizing licensed open carry until 2015. So NAGR launched Texas Gun Rights (TXGR) as a long-term project in 2014 — to make Constitutional Carry a reality in the Lone Star State.

Things reached a boiling point in 2019 when TXGR exposed then Republican Speaker Dennis Bonnen as the man responsible for killing Constitutional Carry. Even though he lashed out by smearing Texas Gun Rights Executive Director Chris McNutt in the media, Bonnen’s political career came crashing down after multiple embarrassing public meltdowns after his dirty political dealings were made public.

Years of grassroots pressure — and multiple politicians losing their elections over opposition to Constitutional Carry — culminated in a watershed legislative session in 2021.

House Bill 1927, sponsored by Republican State Rep. Matt Schaefer, quickly passed out of the House with a strong bipartisan vote after a tidal wave of grassroots pressure.

Gun owners were once again mobilized as Constitutional Carry faced a myriad of roadblocks thrown up by Republican Lt. Gov. Dan Patrick, who was seemingly looking for an excuse to kill the bill in the State Senate.

After a bruising campaign deployed by NAGR and TXGR, including a publicity campaign with Texas Republican Party Chairman Lt. Col. Allen West, Patrick relented and not only brought HB 1927 up for a Senate vote, but very publicly tried taking credit for its passage.

Even though the bill would have become law without his signature, Governor Abbott went over the top with theatrics by hosting a bill signing ceremony at the Alamo and joining Patrick in taking credit for its passage — even though he never lifted a finger to help pass Constitutional Carry during his two terms in the Governor’s mansion.

Constitutional Carry did not succeed because of the “good will” of politicians. We won this fight thanks to pro-gun activists.

As pro-gun champion and State Representative Kyle Biederman stated: “The pressure generated by TXGR members and supporters from across the Lone Star State was the catalyst to getting Constitutional Carry across the finish line in 2021.”

TXGR mobilized pro-gun Texans by sending over 10,000,000 emails, making over 110,000 phone calls — connecting pro-gun patriots to the Capitol offices — and sending nearly 150,000 pieces of mail to pro-gun Texans across the state.

This was is in addition to weeks spent at the Capitol by TXGR staff, working the halls, meeting with legislators, testifying in key committees, and delivering over 118,000 petitions to all 150 State Representatives’ offices.

Passing Constitutional Carry is not only a monumental victory for Texans, but a beacon of hope for gun owners nationwide.

The communist Chinese government even took notice, criticizing the freedom of Texans in their government-run media outlets.

The Fight Isn’t Over

Texas is now much closer to living up to its reputation as a state that tells gun-grabbing commies to “Come And Take It” when they threaten to infringe on the right to keep and bear arms.

But NAGR and TXGR will be back during the next legislative session to fight for Constitutional Carry expansion, a prohibition on “Red Flag” Gun Confiscation laws, and to pass a real “Second Amendment Sanctuary” law with teeth.