There Are Heroes Among Us As The Vultures Circle 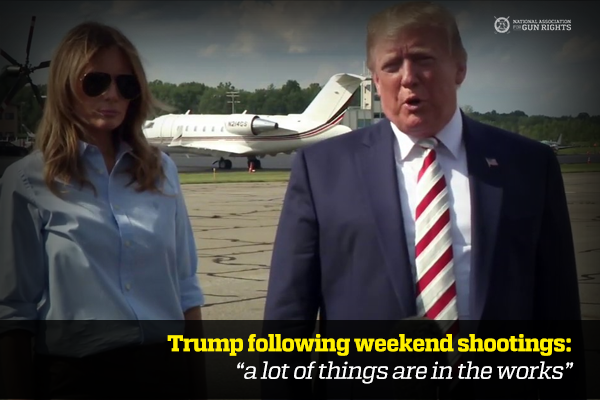 The murders of at least twenty-nine people this weekend in El Paso, Texas and Dayton, Ohio have left me feeling sad and angry…

… Sad for the lives lost at the hands of attackers motivated by pure evil.

… Angry because the anti-gun vultures are once again circling to blame you and your rights for the actions of killers and mad men.

Right on cue, with sickening predictability, the gun control crowd is demanding the same defunct gun laws that disarm only the law abiding and actually help cause these kind of horrible shootings.

I can only imagine the pain the families of the victims are feeling right now as they are notified about their loved ones.

My prayers and those of my staff here at the National Association for Gun Rights go out to the families of the victims.

But like vultures waiting to feast, the gun control lobby is using the blood of innocents to advance their anti-gun agenda, as they have so many times before.

In fact, right now, reports are that gun control mobs are gathered in front of the White House.

Their hands are wrapped around the black iron gates surrounding the complex and they’re screaming at the top of their lungs.

They aren’t there to support the victims or to call for any meaningful ways to keep murderers from committing these kind of atrocities.

Rather they’re pushing their own agenda, demanding President Trump impose more restrictions on your rights.

More concerning, when asked by a reporter about “the gun problem” on National TV earlier today, President Trump responded that “a lot of things are in the works” and “perhaps more has to be done.” 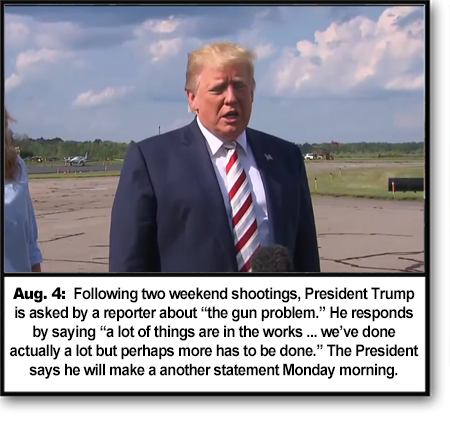 The President says he will speak again at about 10 AM Eastern, tomorrow.

And given recent signs of weakness he’s shown on the Second Amendment, he needs to hear from you now more than ever.

I hope you’ll take a moment to call the White House at 202-456-1111 to politely encourage the President not to abandon the Second Amendment.

Instead, remind the President of the untold stories of the armed heroes who helped save lives this weekend.

… Possibly even more dangerous than when President Obama was in the White House.

Democrats Chuck Schumer and Nancy Pelosi are already calling on Congress to come back from recess early to pass a universal gun registration and background check scheme.

TV and Twitter pundits are already calling for a renewal of the failed “Assault Weapons Ban” and passage of a national “Red Flag” Gun Confiscation law.

These enemies of our Second Amendment rights want you and me to back off and give in to their demands, and if we don’t they’re calling us “terrorists”.

But no defender of our gun rights should apologize for the horrific actions of a deranged lunatic.

What you won’t hear on TV outlets like Fake News CNN is that officials in BOTH Texas AND Ohio say their guns were purchased lawfully through the Brady NICS gun registry.

Also, you won’t find them talking much about the bloodshed that happened in gun control capitols like Chicago just this weekend . . . or that there were no armed security guards present to confront the shooter in Texas.

And the very “solutions” they’re demanding would have done nothing to identify or stop these attackers.

As Second Amendment activists we MUST be vigilant in these times — not just in the defense of our loved ones, but in defense of our right to keep and bear arms.

Gun grabbers seize upon every outrage and crime, so we must always be prepared to fight back to protect our Second Amendment rights.

More and more of our enemies are mirroring the words of late Supreme Court Justice John Paul Stevens, who recently called for an outright repeal of the Second Amendment.

You and I both know that the gun control crowd will work every angle of this massacre as an excuse to restrict our rights.

Please do two things tonight: pray for the families of the victims, and then prepare for a gun control onslaught like we haven’t seen since the Obama years.

Your continued engagement and activism could be the only thing that stands between our gun rights and the coming gun control schemes.