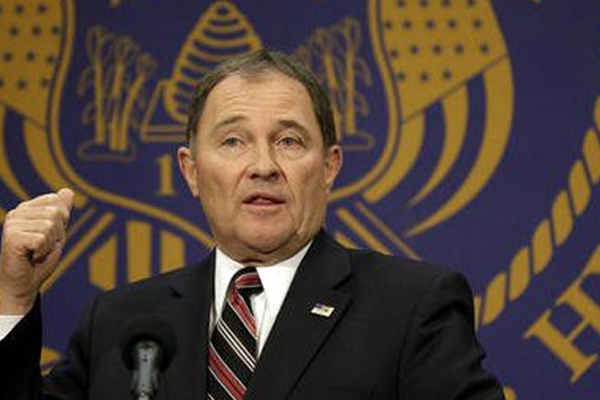 And Utah may be next.

Despite the fact Utah’s “Red Flag” bill went down in flames last session, thanks to the activism of gun rights supporters like you… Herbert’s bringing it back.

This latest hearing comes on the heels of Herbert’s summer news conference, demanding that “Red Flag” Gun Confiscation “be at the heart of the discussion.” 1

When interim committee hearings happen this early before state lawmakers reconvene in January – it’s a sure sign that they’re getting ready to pass this quickly, before you and I can organize against it.

KUTV is even trotting out fake poll numbers, claiming folks like you support “Red Flag” Gun Confiscation, even though their “poll” didn’t even ask about the bill! 2

With pressure mounting, all eyes are on three people:

Please call these three politicians and tell them not to even think about letting a “Red Flag” Gun Confiscation bill come up for a vote!

Then please make a generous contribution to the National Association for Gun Rights so we can mobilize to defeat “Red Flag” Gun Confiscation in Utah before it’s too late.

If “Red Flag” becomes the law of the land in the Beehive State, this is how it’ll play out:

Defeating these dangerous laws is up to grassroots activists like you and me.

The gun control machine Giffords Law Center boasts that passing a Gun Confiscation law in Utah is one of their top objectives.

Following the hearing last week, one anti-gun lobbyist who’s working on the bill says they’ll settle for nothing less than a “Red Flag” law that allows legal guns to be taken from law-abiding gun owners through the “ex-parte” procedure.

That means no due process.

Remember, it was through the activism of pro-gun patriots like you that we were able to stop HB 209 “Red Flag” earlier this year.

Thanks to you, HB 209 did not even make it out of committee.

In addition to this victory in Utah, the National Association for Gun Rights defeated Gun Confiscation in North Dakota, Maine, Virginia, and New Mexico this year.

We’ve been victorious in 2019 – and we will keep defeating “Red Flag” Gun Confiscation, as long as we double down on grassroots lobbying efforts.

And we simply cannot afford to match the gun control lobby dollar for dollar in this fight to defend gun rights in Utah.

That is why I hope you will make a generous contribution to the National Association for Gun Rights so we can once again defeat Gun Confiscation in Utah.

This is going to get VERY ugly, VERY fast. So please call the lawmakers listed above.